This builder used to be sceptical about green homes. Now he’s a convert

Tony O’Connell used to build whatever was put in front of him. The 53-year-old from Wonthaggi, a coastal town in Gippsland, Victoria, has been in construction for 34 years. “What was on the plan was what was on the plan,” he says. “I wouldn’t question it.”

That is, until he attended a meeting for a proposed development in the area – one of a number of locals gearing up to run the interlopers out of town.

“We all went along thinking, yep, it’s going to be a greenwash and just someone else doing a cookie-cutter development to cut our lovely little town up,” O’Connell says.

But he left thinking they might have a point. More than a decade on, that development is The Cape, one of Australia’s leading eco-villages, in the nearby town of Cape Paterson. And O’Connell is one of a growing number of builders trying to improve Australian houses.

Now, when a plan lands in front of him, he’s the first to point out how it could improve, coaxing homeowners into making small changes that he calls “two percenters”. A window shifted to a different wall, a patch of concrete floor that soaks up the winter sun – these tweaks can make a big difference. “I get a lot of irate calls from architects,” says O’Connell.

According to Trivess Moore, a senior lecturer and researcher into sustainable housing at RMIT, builders – and plumbers, electricians, people who sell appliances and others – are “critical intermediaries” in delivering sustainable housing. 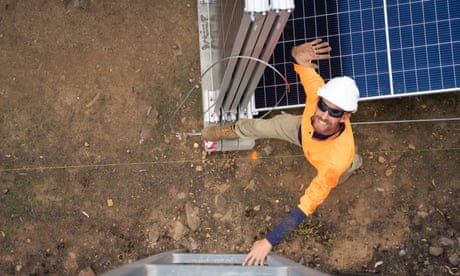 Most people build new homes or do renovations rarely, Moore says, which leaves them reliant on tradies for information.

“Quite often it might be that someone is recommended to you, ‘Oh, my friend used that builder, I’ll trust whatever they say,’” he says. “[The ideal is] when you do have builders who are going the extra mile, and also going ‘If this was my house, this is what I’d want for a better outcome.’”

But green builders have a lot of work ahead of them. Building better houses from scratch is one thing. Improving Australia’s dismal existing housing is another.

The national building code currently requires new houses to have a six-star energy-efficiency rating. The majority of houses built before 2005 have ratings between 1.5 and two.

“They’re pretty shocking,” says Alan Pears, a senior industry fellow at RMIT who has been working in housing policy since the early 1980s. “[Problems with] windows, the building fabric, poorly insulated, poorly shaded and the houses leak like sieves.”

O’Connell says many older homes are so leaky, the air in the house changes over about 15 times each hour. As well, they are full of inefficient appliances, spanning from hot water systems to fridges to lightbulbs to televisions.

It all adds up – and exacerbates inequality. People on lower incomes are more likely to be living in older and poorer quality homes, and then either cannot afford or are not in control of upgrades.

According to Kellie Caught, senior advisor on climate and energy at the Australian Council of Social Services, low-income households spend 6.4% of their income on energy bills, against a national average of 2.4% and just 1.5% for high-income households.

Poor quality housing is also detrimental to people’s health, a factor likely to worsen as the climate crisis unfolds.

“We’ve got a lot of people who in winter are suffering from cold,” O’Connell says. “And in summer, we have a higher death toll from people living in heat who can’t afford air conditioning than we do out of bushfires.”

There are ways to make older homes more efficient, but some are harder than others.

It’s easy enough to put insulation in ceilings and sometimes under floors, to replace lightbulbs with LEDs, and to plug gaps to keep out the cold and heat. Other changes, like upgrading to double-glazed windows, putting insulation into the walls, and buying better appliances can be costly, difficult or both.

The poor standard of Australian buildings has prompted calls for a nationwide efficiency drive as part of federal and state coronavirus stimulus spending, which would also help tackle the climate crisis. About a quarter of national emissions are from buildings.

The Australian Council of Social Service and the Australian Industry Group are among those to have urged the Morrison government to support an efficiency and solar power package for low-income and social housing, finding it could create 60,000 jobs.

The chief scientist, Alan Finkel, has also highlighted the benefits of fixing the country’s leaky buildings, as have groups representing business, the energy industry, the property sector, unions and major investors.

Beyond Zero Emissions, a climate change thinktank, analysed what it would take to transform Australia’s building sector as part of what it calls a “million jobs plan”. It found there would be about 200,000 jobs in a five-year program to perform 2.5m “deep energy retrofits” on existing homes and construct 150,000 7.5 star-rated social houses.

“You can just get the dollars out the door and into the community really quickly,” says Prof Frank Jotzo, director of ANU’s Centre for Climate and Energy Policy. “It would be a much better investment economically, socially and environmentally than the Homebuilder program, which is paying money to people who already have a project under way.”

Advocates are clear that a nationwide housing overhaul is needed. But it just hasn’t happened.

“We’ve been talking about regulating upgrading of older buildings since the 1980s,” Pears says, breaking into resigned laughter, “and we haven’t done it.

“I think it’s fair to say there is a lack of will and leadership to drive this because it is tricky.”

In the early 2010s, Heidi Lee was the project manager of Beyond Zero Emissions’ ambitious plan to retrofit every single building in Australia.

“If you committed to doing it wholesale, it’s much cheaper,” Lee, now the project lead on BZE’s “million jobs plan”, explains. But when it comes to upgrading inefficient homes, you have to spend money to save it, and lots of Australians don’t have the cash sitting around.

Another big weak point is the rental market. “The landlord would have to spend the money to upgrade the building and the tenant is the one getting comfortable and having lower bills,” Pears says. “Why would a landlord do that?”

One way around this, and a major solution to unlocking mass retrofits, Lee says, is the expansion of environmental upgrade agreements across Australia. Under these agreements, owners can get low-interest loans that cover the upfront cost of energy retrofits and are paid back through council rates.

If you get the design right, it doesn’t cost a lot of money to build sustainable

Such schemes are currently available in Victoria, New South Wales and South Australia, but only for commercial buildings. Victoria recently passed legislation to extend the schemes to homes. The space is still developing, Lee says, but could be extended to social housing.

“We see upgrade agreements as a key plan for a green recovery, particularly coming out of Covid,” says Scott Bocskay, CEO of Sustainable Fund Australia.

Bocskay says there are a number of other energy-saving schemes and incentives out there – for instance, Solar Victoria offers interest free loans for solar panels – but generally the approach is “fragmented”.

Another option for prompting retrofits, Moore and Pears suggest, is putting a minimum energy-efficiency standard on houses that are put up for lease or sale. The Australian Capital Territory intends to introduce such a law for rental properties in 2021.

“That’s a way of using the market to lift the bottom, but it also means if you choose not to sell your house for 10 or 15 years or whatever it might be, you don’t have to worry about that,” Moore says. “It doesn’t force everyone to make the change right now but it ensures that over time there is that lifting of standards.”

There’s also the question of how to gain public momentum. People building new homes are often pushing for sustainability in the long term, but decision-making for renters tends to be more multifaceted. Plus, a house’s energy performance isn’t exactly visible.

“It’s pretty hard to tell if there’s insulation in the walls. A lot of people don’t even know which way the house is facing,” Pears says.

“And look, to be honest, most Australians have never lived in a decent house in terms of energy performance. We’ve all grown up in 50- or 20-year-old buildings that are pretty awful, and we don’t even know what a good building is until we live in it.”

There’s no doubt homes being built in Australia today are better than those constructed last century. But experts and builders say the six-star requirement is already out of date, and leaves Australia in Europe’s dust.

“While that may have been a big step 10 years ago, now six stars is so easy to achieve for a builder,” O’Connell says. “We’re building a lot of homes at the moment that people can’t afford to live in through extremes of temperature. We’re not planning for the future.”

If you design a house well enough, O’Connell says, you can get to six stars with single-glaze windows and no insulation. Add a bit of insulation, and it rises to seven or eight. These are the kinds of dwellings he is working on at Cape Paterson, which he sees as a benchmark for better housing in Australia.

“If you get the design right, it doesn’t cost a lot of money to build sustainable,” O’Connell says. “It’s when you don’t get the design right and you try to get your energy ratings by putting increasingly more expensive product in to try and achieve the rating, that it does cost a bit.”

There are hopes the 2022 revisions to the National Construction Code will see the minimum standard for new homes and significant renovations lifted to seven stars.

O’Connell delivers talks to other builders and to councils about building more sustainable homes. Change is slow, he says, but happening.

“I think if you went back 10 years ago and talked about sustainable construction, people would think you were proposing to build an igloo somewhere,” he says.

Now, people are starting to see sustainability as a long-term benefit instead of a drain on their bank accounts.

“It’s hip pocket. They get their quarterly power bill, they know how much it’s costing, you demonstrate how little it can cost,” he says. “I think the thinking has changed now, where people are considering a lot of these things to be a benefit rather than a cost.”